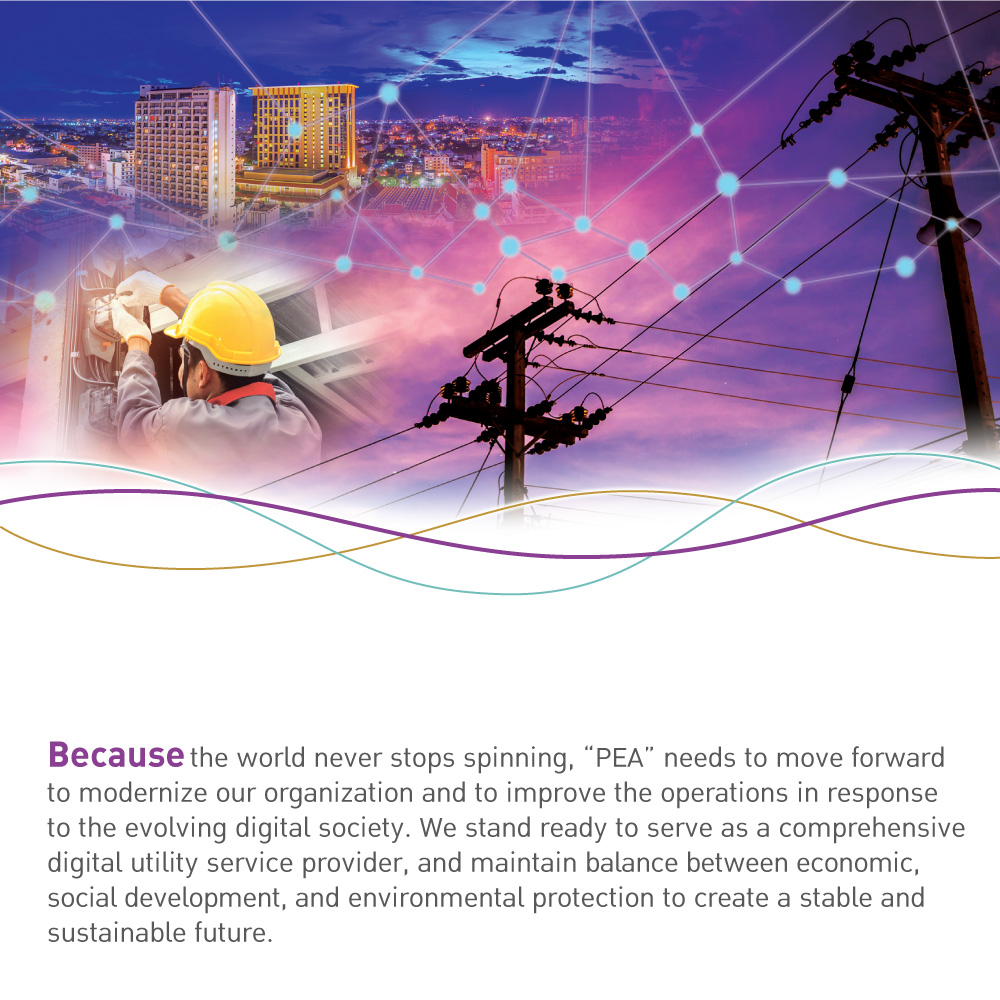 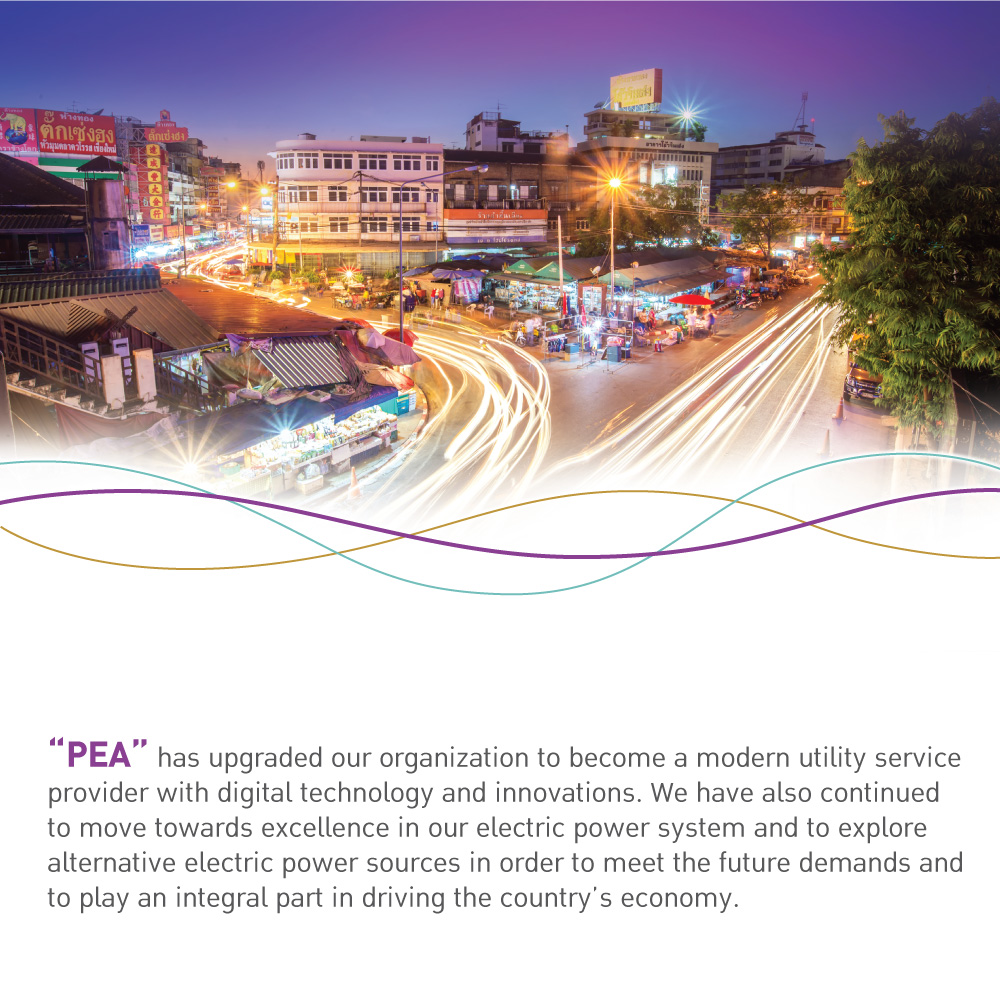 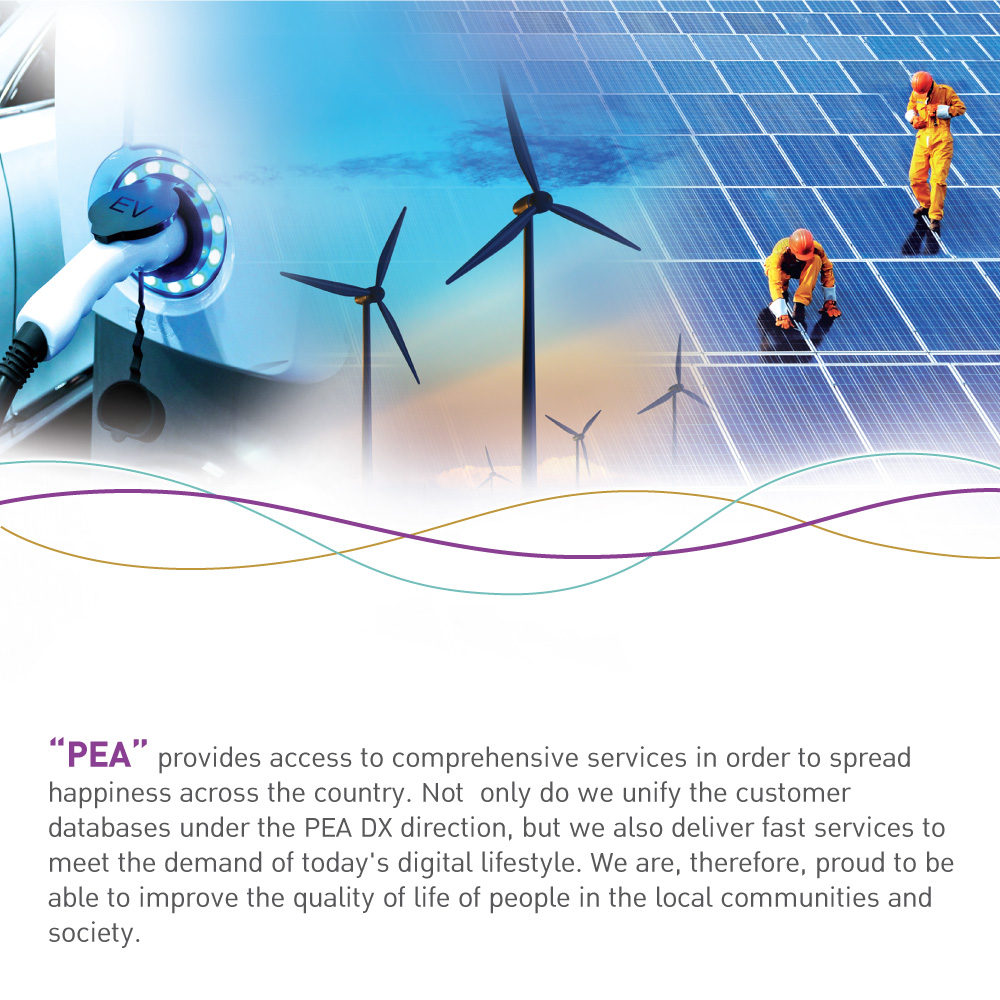 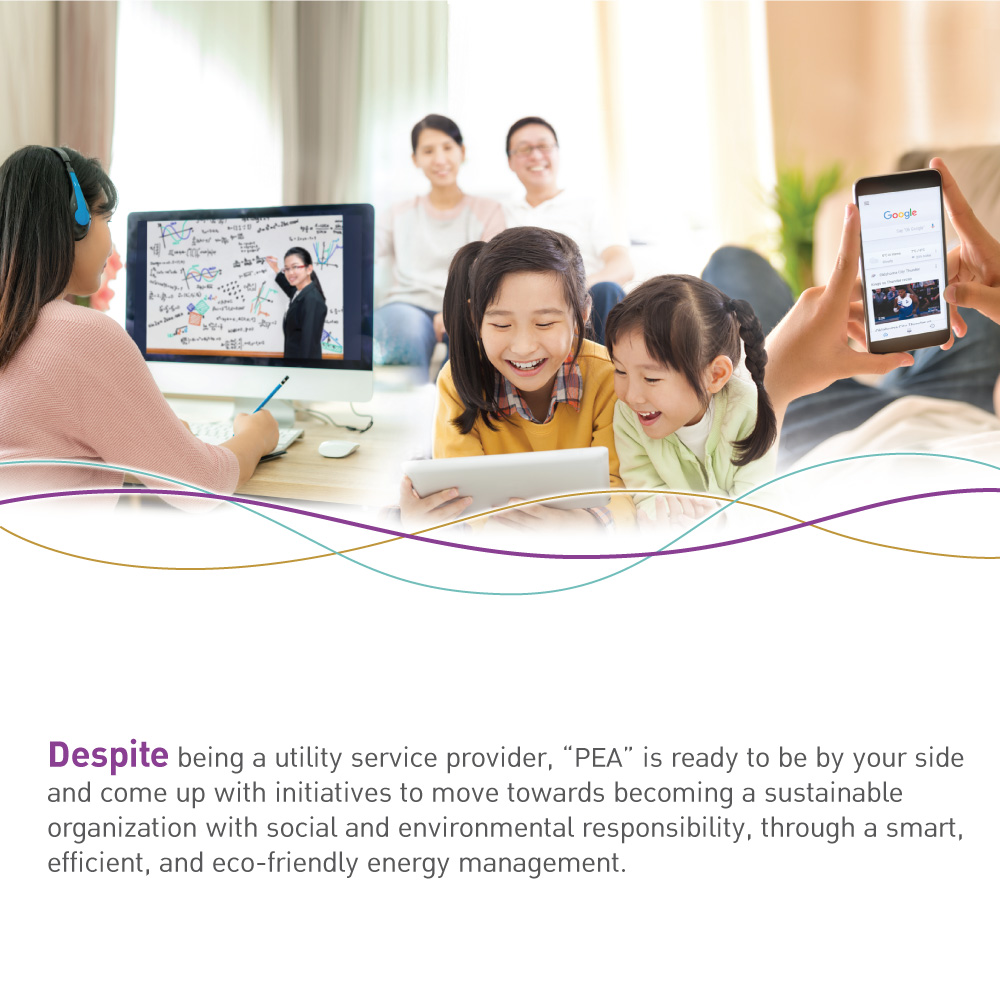 Electricity was first available in Thailand in 1884, having Field Marshal Chaopraya Surasakmontri (Chem Saeng-chuto) as the originator of Thailand’s electricity business, starting from the installation of power generators, electrical cable wiring, and installation of electric lamps at the Department of Royal Guards, which is where the Ministry of Defence is located at present.
The provincial electricity business was officially initiated when the authority established the Electricity Unit in the Burapiban Division, Department of Public Health, Ministry of Interior, and electricity was generated for Mueang Nakhon Pathom Municipality to be sold to the public for the first time in 1930. After that, it was upgraded to the Electricity Division and Provincial Electricity Division, respectively before being formed as “The Provincial Electricity Organization” in 1954. 1981-1990 • 3rd
Decade, support of
development to businesses
and industries

Electric power distribution systems were prepared to support the increasing demands for electricity by increasing the electric power distribution system cycles in the areas with high-level electric power consumption, upgrading the voltage system, and connecting the power plants under the Provincial Electricity Authority with substations of the Electricity Generating Authority of Thailand instead of electricity generation by diesel power plants.
In addition, 33 kV distribution systems were constructed and linked using submarine cables from Khanom Substation of the Electricity Generating Authority of Thailand to Ko Samui, with the approximate distance of 25 kilometers, which was the first submarine cable laying in Thailand and the start of the application of natural resources, such as hydropower and solar power for generating electricity. PEA focused on the operations to support and promote development of industries into rural areas, tourism industry and community development, and the Eastern Seaboard and Southern Seaboard Development Programs, with an emphasis on improvement and enhancement of electrical system efficiency and stability to meet the demand for electricity consumption with speedy and efficient services through the application of new technology. 2001-2010 • 5th
Decade, development of the
organization to move forward
to energy business at an
international level

The organization was restructured by focusing on increasing distribution system stability with technology. The business was expanded, which could be divided into two areas, namely electrical system networks, and electric power distribution and services. In addition, project management was improved to be comprehensive, personnel capability was developed, and resources were managed to achieve optimum efficiency to be ready for running an energy business at an international level. PEA has been determined to provide efficient electric power services, continuously develop the organization both in terms of quality and services to excel in electric utility in response to the demands of customers, and create value to the society and environment with digital technology. PEA is ready to move forward and transform the organization to PEA Digital Utility by operating the business in compliance with good corporate governance to be ready for its 60th year of business and to become a modernized utility service provider through digital innovations and technological development with an aim to achieve excellent electric power systems, which will serve as an important part of steering the country and developing a stable and sustainable future.

Provincial Electricity Authority or PEA is state enterprise under the Ministry of Interior,
operating in energy business . PEA mainly focuses on procuring and providing electric
power service, including other related business in terms of power distribution service and PEA’s
customer support service, such as construction work for users, inspection, repair and
maintenance work, and asset rent or utilization.